Discontinued in 2002, the Honda Passport is about to make a comeback. A new version of the midsize crossover will break cover at the 2018 Los Angeles Auto Show and will slot between the CR-V and the Pilot. Honda is still keeping details in the vault, but we do have two teaser photos and a video to look at. 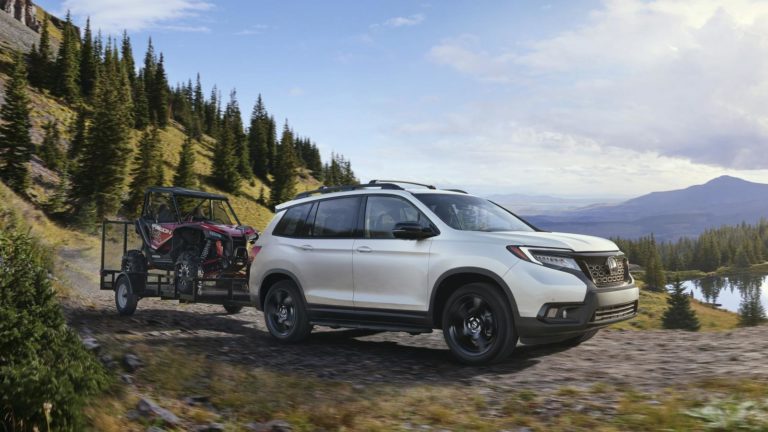 A rather short-lived nameplate, the Passport made its debut back in 1993 as a badge-engineered version of the Isuzu Rodeo. Two generations were built until 2002 when the Passport was discontinued after a not-so-successful run. Honda describes the new Passport as a “more personal, powerful, and off-road-capable SUV that hits the sweet spot between daily driving comfort and weekend off-road,” so we should be getting a smaller, more rugged Pilot.

One teaser photo and most of the video show birds-eye views of the crossover, so there aren’t many details to talk about. However, it’s pretty obvious that the new Passport borrows many styling cues from the Pilot. The overall design is very traditional. There’s a somewhat long front hood, short overhangs, a tall glasshouse, and a raked tailgate. The Passport is supposed to be rugged, but Honda wants it to look sporty.

Up front, we can notice a V-shaped engine hood and a wide grille flanked by swept-back headlamps.

The second teaser, which shows some of the profile and the rear end, reveals tall belt line that rises toward the D-pillar toward the back. The SUV features big quarter windows and a rather thin D-pillar, at least when compared to the bigger SUVs. It also has a sunroof and a roof rack.

There’s way too much dust to get a full grip on how the rear end looks, but it’s pretty obvious that the Passport sports large taillights. The light units are actually unique to this model. There’s also a sizable roof spoiler and a massive license plate recess between the taillights. I guess we need to wait for more teasers to get a better look.

There’s absolutely no information as to what we’ll find inside the cabin, but the Passport should share features and design cues with existing Honda SUVs, most likely the CR-V and the Pilot.

So expect similar layouts, with a big infotainment display on the center stack, A/C controls below, and a pair of A/C vents above. The wide instrument cluster should have a TFT display in the middle in the less expensive trims, while the range-topping model could feature an all-digital unit.

Although the Passport is supposed to be a more rugged SUVs for off-roading, Honda likely won’t make many compromises when it comes to materials. Even the most affordable trim should have soft-touch surfaces on the dashboard and the door panels, while the more expensive model should come with a selection of leather and wood trim.

Expect the SUV to arrive with Honda’s latest technology and safety features, although most of them will be optional.

As a compact to midsize SUV, it should offer plenty of space for rear passengers and a roomy trunk section with fold able rear seats.

Honda had nothing to say about the engines that will power the Passport, but since it will share underpinnings with the Pilot, it’s safe to assume that it will come with the same unit under the hood. The Pilot draws juice from the company’s tried-and-true 3.5-liter V-6, rated at 280 horsepower and 262 pound-feet of torque in this application.

With the Passport likely lighter than the 4,000-pound Pilot, output could drop a bit. But hopefully, Honda will keep the V-6 unchanged to give the Passport better performance against the competition.

But the big question is, will Honda add a second engine from the CR-V to the lineup? The compact is offered with one of two four-cylinder power plants, starting with a 2.4-liter rated at 184 horsepower and 180 pound-feet. The new 1.5-liter unit would be a better choice though, as it cranks out 190 horses and 179 pound-feet and returns better fuel economy.

As an in between style suv, the Honda Passport will find its way on cross-shopping lists with both compact and the midsize crossovers that are fun to drive off the beaten path. The Subaru Forester is one of them. Luckily, Subaru just replaced its dated crossover with a fifth-generation model for the 2019 model year. Although it remains familiar, it sports a fresh design, and it grew a bit larger, so it might turn out to be the perfect competitor for the upcoming Passport. It’s equipped with all the modern tech you need, and it has a spacious trunk, plus all sorts of premium-like optional features. Power comes from a 2.5-liter boxer engine rated at 182 horsepower and 176 pound-feet of torque. This might be the Forester’s only problem as there’s no V-6 option, but Subaru’s iconic Symmetrical AWD system makes it a fun SUV when you leave the tarmac. It’s not very expensive either, starting from $24,295.