Kia is giving the 2023 Telluride large crossover more off-road muscle along with a big dose of Madison Avenue marketing. 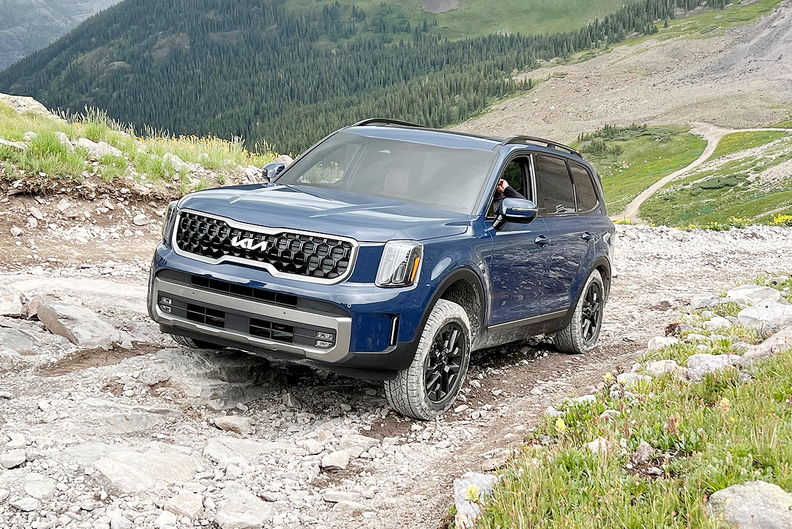 The Telluride name — pronounced with a short string of strong consonants, coincidentally, like Tahoe, Tundra, Bronco, Cherokee, Pilot, Yukon, Sequoia and Tundra — conjures up mighty and strong capability. But Kia is still largely a challenger brand in a segment where Jeep, Subaru and others have long forded.

In late July, creative agency David & Goliath, a unit of Innocean, assembled a cast of camera operators, directors and three 2023 Telluride X-Pros and trekked up the side of a peak in the Rocky Mountains that separates the Colorado towns of Ouray and Telluride. The mission: Demonstrate the Telluride’s new fortitude for commercial audiences in what Wagner calls “a great majestic setting.”

The setting was part alpine meadow, part end of the Earth, part crater, part mountain stream, with lots of loose and fixed rock, big and small, and the occasional tumbleweed.

Kia invited a small group of journalists to the summit to experience some of the first of two days of shooting. It was the first time the crossover had ever been filmed in or near Telluride, a onetime mining outpost where Butch Cassidy robbed his first bank, in 1889. Tellurium minerals were once mined throughout the region, and the streets of the rustic whistle-stop town are still lined with gold rush cabins.

Whereas Aspen, Colo., is the near exclusive enclave of Saudi sheikhs, Lamborghinis and Porsches, there is still a slice of Telluride that is authentically Western and bare, raw frontier — Ralph Lauren’s nearby working ranch and some five-star resorts aside.

The trail up and down saw waves of Jeep Wranglers, utility terrain vehicles and tourists in open-air mountain buggies. There wasn’t a Land Rover Defender or even a new Ford Bronco spotted.